That was a quote from the director when speaking to the WB front office about the great turns shown by the young cast members of ‘Three on a match’. Ann Dvorak received high marks for this great showing as a socialite who tires of her lifelong place in the upper crust of virtue and society only to take the most devastating of falls to the bottom. Joan Blondell also received high marks for her role as Dvorak’s childhood friend and social opposite who soon takes her place at home and in high society. Davis, who gave a standard turn for a supporting role, didn’t earn Mr. LeRoy’s kudos… but everyone makes a mistake now and then.

I’ll admit, I didn’t expect too much out of this film and was greatly surprised. The story starts out innocently enough (as many a WB early 30’s crime drama did) and then opened a wound just to pour salt in it with a lemon juice chaser by the very riveting end. Lyle Talbot and Warren William turn in very good supporting turns along with a very early gangster cameo for Humphrey Bogart. 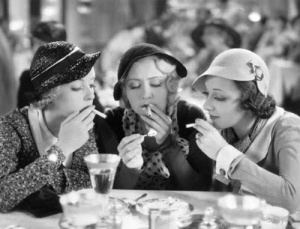 Well paced and to the gritty point, this one is a keeper. Popcorn and absolutely no bathroom breaks.

Tracy and Hepburn certainly hit it again. Not that these two ever made a bad movie together anyway.

Not as involved as ‘Adams Rib’ or ‘Woman of the Year’, it simply plays out, a light hearted yarn where we get to watch them play along with a great turn by Joan Blondell.

James Cagney, America’s leading gangster for decades, simply wanted to be a song and dance man. But, this was the film that would type cast his stardom for the remainder of his career. Originally cast as the sidekick, Cagney and Wood traded spaces, giving Jimmy the range he obviously required on-screen.

Feeding off the previously released film ‘Little Caesar’ with Edward G. Robinson, the film hits hard and keeps hitting at every turn, to almost make us feel the plight of this depression era hood and his inevitable downfall. Although recast in a dozen later gangster films echoing the same thoughts, it was ‘Tom Powers’ that set Cagney in motion and still sets him apart as a ‘B’ list (as Gangster pics were considered in the day) actor worthy of ‘A’ list roles. 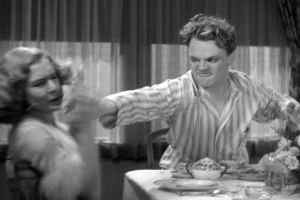 Not till his biggest gangster redux eight years later in ‘Angels with Dirty Faces’ or ‘The Roaring Twenties’ would Cagney get such sweet mob roles. Listed as ‘Best’ in my category, it helped set the pace and take the lumps for better mafia films to follow.